As hard as it is to believe, the new year has begun and 2022 is here. There are so many things to do, jobs that you may have put off until after the holidays were done. Now that the time is here, you may be looking at making a new budget, cleaning out some closets, or maybe even undertaking a renovation project you’ve been wanting to do. If you haven’t had your chimney inspected or cleaned lately, that’s definitely a job that needs to be put on your list of things to do. You use your chimney too much during a cold Illinois winter to risk having your fireplace damaged or to put your family’s health at risk by not 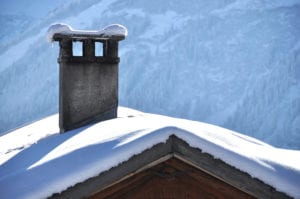 What We’ll Be Looking For

When you give Jiminy Chimney Masonry and Repair a call to set up an appointment, you are setting yourself up for the best, most complete chimney inspection and cleaning in the region. We’ll start off looking for creosote buildup. During the winter, creosote is much more likely to build up. There are a couple of reasons for this. First, obviously you’re using your fireplace much more. Second, during the winter the interior of your chimney will be colder than during the other seasons. Burning a fire, whether wood or gas, causes creosote to build up. With a wood fire, the moisture and chemicals that are released in the combustion process are directed up the chimney in the form of smoke. During a cold Illinois winter, the top of the interior of the chimney is even colder than usual, and when the smoke hits the top, it condenses and forms a layer of buildup called creosote. The more you use your fireplace, the thicker the buildup, This buildup smells really bad, but that?s not the worst of it. The biggest problem is that it is a highly flammable buildup, and that means that you are at risk for a chimney fire every time you light a fire. According to the Chimney Safety Institute of America (CSIA) website, even as little as an eighth of an inch of creosote buildup is enough to catch a spark and cause a serious chimney fire. If you’re burning with gas, there are still chemicals being released, and these chemicals can cause a sludge which can cause corrosion in the interior of the chimney structure or on the chimney liner if your chimney has one, as most chimneys do. It’s important to catch this buildup before it gets out of control, which is why it’s so important to give us a call now to set up an appointment.

When you hear about a chimney fire, most often your thoughts go to a roaring, blazing fire shooting out of the chimney. Although this can happen, in most cases there isn’t enough oxygen in your chimney for a huge fire to burn, and most often the fire burns out before it gets to that stage. This can be an even more dangerous situation, however, because an undetected fire can cause undetected damage. Damage that has not been repaired will just get worse as you continue to use your fireplace, and that means that there could be areas of cracks that could be allowing dangerous gases to sneak back into your home, causing serious health issues for family members and pets.

If we do find damage to the masonry of your chimney, we’ll probably recommend one of several types of repairs. If the mortar is damaged or old and weak, we may encourage you to have tuck pointing done. Tuck pointing is the process of removing the old, damaged mortar and replacing it with fresh, strong mortar that matches the remaining mortar and keeps your chimney looking fine. We probably won’t undertake this process while it’s cold, however, because mortar work is best undertaken when the weather is warm. There are other repair jobs that are better done in the warmer months as well, but if we do find something that needs to be repaired immediately, we’ll make sure to explain the process and do great work.

Why Jiminy Chimney Masonry and Repair

You may be wondering what it is that makes Jiminy Chimney the best company to call when it comes to chimney and fireplace inspection, cleaning, and repair. That’s an easy question to answer! Because we are a local business serving Lake County and McHenry County and the surrounding areas in Illinois, we care about the people we serve. We are CSIA certified, which means we have received and continue to have access to top-rated educational materials, that we have passed the tests required for this certification, and that we can get information on any problems you may be having with your chimney and fireplace. We have been in the business for over thirty years, serving the good people in Illinois, and we have a proven track record of excellence in craftsmanship, repair work, and customer service. If you have chimney inspection and cleaning on your list of things to do in 2022, make sure to give Jiminy Chimney Masonry and Repair?a call soon!